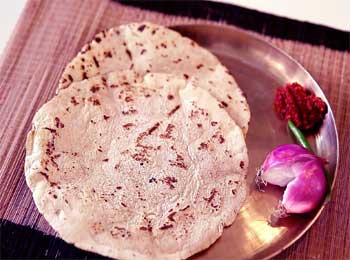 Once a Seth (Rich man) started a free food service place for the poor. Spirit of charity was less in him but still he did charity because he wanted society to praise him as generous person.

He had wholesale business. At end of month, whatever grains were left which were not good to be sold were sent to that place to be used to make flour for making chapatis, in name of charity.

Often chapatis made of rotten flour were available to the hungry in food service provided by rich man.


When she came to know about material sent to food service place, she felt very sad as she knew it wrong to give poor quality food in name of charity.

Rich man had lots of servants but still daughter-in-law decided to take all responsibility of preparing food on herself.

On very first day, she made chapatis using same flour which was used at place of free food service.

When Seth sat down to eat, she served him those chapati along with food in his plate. Seeing thick chapati, Seth was surprised and out of curiosity, he took a bite of chapati and ate it.

Daughter-in-law replied, “Father, this is the flour i bought from after world.”

Seth was confused and said, “I don’t understand..”

Daughter-in-law replied, “Father ! Whatever charity we did in the previous life, we are now eating the same and whatever we do in this life, we will get it, hereafter.

That’s why I thought that if you get a practice of eating it from now on, then there will be less suffering in afterlife.”

Rich man realized his mistake. He apologized to his daughter-in-law and got the rotten flour thrown away on the same day.

Since then, poor and hungry people started getting chapati made from fresh flour.

Learning:
While donating, there should not be a feeling that people should praise me, give applause. Donation should be made with the spirit to help other.

There is saying that – Donation should be so secret that while giving, even your other hand does not know.

You May Also Like: How to Donate – Little Boy’s Donation