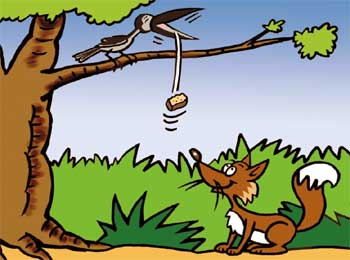 Once a fox was roaming around in forest looking for food. He looked everywhere but couldn’t find any food.

Then, he looked up and saw a crow sitting on a tree, holding a piece of bread in his beak. Seeing that bread, fox started to drool over

When crow looked at him. he said, “How handsome you look..!”


Crow was always concerned about his looks and was pleased to hear fox words as no one has ever praised him before.

Fox continued to praise his looks and crow got more and more happy to hear fox.

Then fox said, “I am sure you have golden voice too.”

Crow thought to himself that no one has ever said such praise for his voice.

Since fox was saying it, crow thought to himself, “But surely, If an intelligent fellow like Fox says that i have golden voice then it must be right.”

“I will be happy if you could sing a song for me”, said fox.

Crow was very much pleased to hear sweet talks from fox and thought to himself, “I think this fox have an ear for music and he really want to listen to me. I will sing for him.”

As soon as fox ate that piece he left and crow had nothing left to eat.

At this point crow understood that he was deceived by the flattery of fox and he was a fool to open his mouth with piece of bread in it.

Crow learnt his lesson and thought that, “Next time, i will not be deceived by such flattery.”

Moral Stories for Kids: Caring for Others..