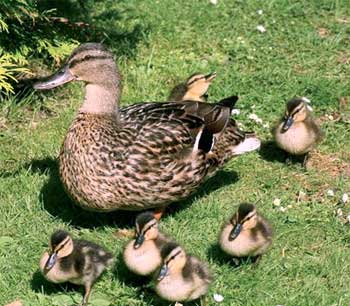 A mother duck and her little ducklings were on their way to a lake one day. The ducklings were very happy following their mother and quack-quacking along the way. All of a sudden the mother duck saw a fox at a distance. She was frightened and shouted, “Children, hurry to the lake. There’s a fox!”

The ducklings hurried towards the lake. The mother duck wondered what to do. She began to walk back and forth dragging one wing on the ground. When the fox saw her he became happy.

He said to himself, “It seems that she’s hurt and can’t fly! I can easily catch and eat her!” Then he ran towards her.

From this Story we know, Some birds drag one of their wings on the ground when an enemy is going to attack. In this way they fool their enemies into thinking they are hurt. When the enemy follows them this gives their children time to escape.

Moral:
Parents risk their life to save life of their children..!!

One thought on “Fox and Mother Duck..!!”