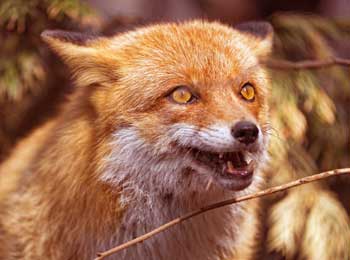 Once upon a time, in a forest lived a fox, whose fur became home to some lice. In sometime, thousands of lice were all over his body. It became terrible for fox. He rubbed and scratched, did everything to get rid of lice but couldn’t.

One day, fox went to pond to drink water. As he placed his front paws in pond and started drinking water, he noticed that paws in pond were suddenly free of lice, all lice from paws had crawled up to his body because of water.

When fox realized this, he thought, “I understand now, how can i get rid of lice..”

So he looked around and found a stick. He took one end of it in his mouth and slowly began to walk inside water.


As soon as his legs were in water, lice moved up from his legs to get away from water. Further fox went into water, higher lice climbed. When fox abdomen was in water, lice had moved onto its back.

Little by little, fox went in water, deeper until all lice were onto its head. It went further until only its nose and stick were out of water.

At that moment, fox simply let go of stick.

Lice floated away on stick and fox walked out of pond totally liberated from all lice and botheration. He felt free.

Similarly, all spiritual practices follow are like stick that are used to get rid of our attachments and undesirable habits. They help us to get free from all that binds us. Eventually, attachment to stick of our spiritual practices also has to let go of because it was only means to reach enlightenment, its not the end.

This is the correct understanding and relationship to have with our practices.

You may Also Like: Distractions in Path! Spiritual Growth Moral Story