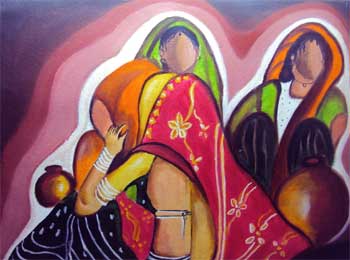 Four women came to fill water at the well of village. While they were filling water, they started talking to each other.

While talking, they started extolling the qualities of their son.

First woman said, “My son plays flute. He plays so well that whoever hears his flute, becomes mesmerized. I am very happy to have such talented son.”

Second woman said, “My son is great wrestler. Not only in this village, he is famous even in far-off villages too. May God give such a virtuous son to everyone.”


Just then third woman came forward and said, “My son is intelligent. There is no one more intelligent than him in this whole village. People come to him with their problems, to get his advice. I am blessed to have such son.”

Fourth woman listened to everyone but said nothing.

Seeing this, those three women started saying to her, “You also say something.. What is the quality of your son? Tell us.”

At this fourth woman said, “What can i say.. My son has no qualities like your sons.”

After listening to her, all three women were proud of their sons.

While talking, everyone filled their pots with water. They started lifting their respective pitchers to go back to their home.

At same time, son of first woman was passing by playing flute. He saw that his mother was not able to lift pot full of water but ignoring this, he left from their playing his flute.

Second woman son was practicing at a distance. As soon as second woman got down from well step, after lifting pot, her foot slipped. Somehow she balanced. Her son saw this but still didn’t come to her and continued with his practice.

Just then, third woman son also came out from his home. Seeing him, his mother said, “Son! I am holding the pitcher with both hands. Just put this rope on my shoulder.” But he son didn’t even responded to her words and left.

Just then son of fourth woman was also passing by that place. Seeing pitcher on his mother’s head, he went to her and took that pitcher from her head and placed it on his head and started walking with her mother.

An old woman who was sitting near well, watching and listening to all of this said, “I see only one virtuous son here… The one who is carrying pot on his head. Who can be a better son than a son who serves his parents..”

You May Also Like: Who is Most Powerful Person? Father Question