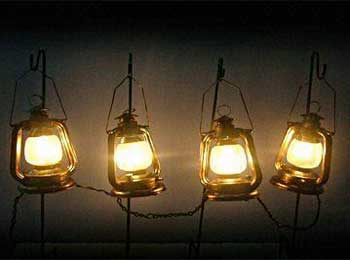 Once in a city, lived a person who was very wealthy but despite having immense wealth, he had desire to get more money.

One day, he got to know that a miraculous saint had arrived in his city. He went to saint, invited him in his house and served him warmly. Pleased with his service, before leaving saint gave him four lamps.

Giving all four lamps, saint told him, “Son! whenever you need money, light first lamp and holding it walk in east direction and when it extinguished, dig at that place and you will get money.

After that again if you need money, light second lamp and holding it walk in west direction till it gets extinguished and when you dig there you will get immense wealth buried in ground.


Even if then your need to money is not fulfilled, light third lamp and walk in south direction and dig at place where it extinguish and you will get money.

In end you will be left with one lamp and one direction but don’t light that lamp ever and go in that direction.”

As soon as saint left, man lit first lamp and walked toward east, lamp extinguished in forest. When he dig there he found an urn which was filled with gold ornaments.

Even after getting all this, that man wanted to get more money. So he thought about using fourth lamp which saint had forbidden him to use.

But blinded by greed he thought, “There must be more wealth hidden but saint doesn’t want me to go there because he wants to keep that money to himself. So, he decided to go there as soon as possible.”

When he opened door of first room, he found diamonds and jewels, seeing which his eyes dazzled. In another room, he found gold. After going further, he heard sound of mill running.

When he followed that sound and opened the door of that room, he saw an old man grinding a mill.

Man asked him, “How did you get here?”

“Will you run this mill for a while? I want to take a break and while resting i will tell you the whole story, how and why i got here?”, said old man.

Man thought that old man must be having information about more money hidden in this palace so he agreed.

Seeing this, man asked, “Why are you laughing like this?” and saying this he was about to stop running mill.

Just then old man said, “Don’t stop. Keep this mill running. From now on this palace is yours and this mill as well. You have to keep running this mill all the time because once mill stops, this palace will collapse and you will die by being buried in it.”

Taking deep breath, old man further said, “I too had reached this palace out of greed by lighting the last lamp given by saint. Since then i am running this mill here. My entire youth was spent running this mill.”

Saying this old man was leaving.

“Before leaving, at least tell me how can i get rid of this mill?”, shouted man.

Old man replied, “Unless someone like me or you comes here blinded by greed, you will not be able to get rid of this mill.”

From that day on greedy man kept running mill and cursing himself while waiting for someone to come and replace him.

You May Also Like: Greed Stories – Magic Crystal Ball

One thought on “Four Lamps and Saint’s Warning – Greed Story”