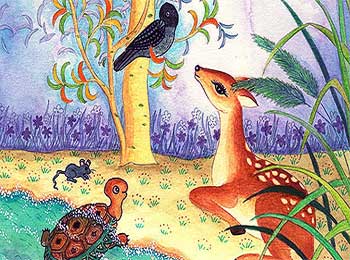 Long ago, there lived three friends deer, crow and mouse lived in a jungle. They used to stay together, share meals together.

One day, a turtle came to them and said, “I am all alone. Can i also join your company and become your friends?”

Crow said, “Yes, you are welcome.”

Soon, they became good friends with turtle. One day, all of them were talking about hunters visits to forest and ways to stay safe from them.


No sooner had they talked about it, a hunter appeared on scene. Seeing hunter, deer ran away, crow flew and mouse ran into hole.

Turtle tired to crawl fast but was caught by hunter. Hunter wanted to trap deer but he got only turtle. He thought to himself that it’s better to feast on turtle rather than to go hungry.

Hunter took that turtle and started to walk away. Turtle’s new friends become much worried about him being trapped by hunter.

So, they decided to think of plan to help turtle and free him from hunter’s net.

Crow then flew high up in the sky to see hunter location. He found that hunter was walking along the river bank. Then they quickly made plan.

While hunter was still along river bank, deer ran ahead of hunter unnoticed and lay on the hunter’s path as if it’s dead.

When hunter saw deer from distance, lying in ground, he got very happy and thought that now he can have good feast on it and sell it’s beautiful skin in market.

Wanting to trap deer, hunter put the turtle on ground and ran to pick up deer.

As soon as hunter went to fetch deer for it’s tasty flesh and skin. Mouse came and gnawed through net and freed turtle. Turtle hurriedly crawled away into river water.

When hunter reached near, to his surprise, deer suddenly sprang up to it’s feet and darted away in jungle.

Before hunter could try to understand what happened, deer had disappeared into forest.

Dejected hunter turned back to collect turtle, he had left behind on ground. When hunter reached that place, he was shocked to see that only cut net was left behind and turtle went missing.

Hunter couldn’t understand what happened but now he had nothing to take back with him. Sadly, hunter went back empty handed.

Moral:
A True Friend will Help you Get through Difficult Times.