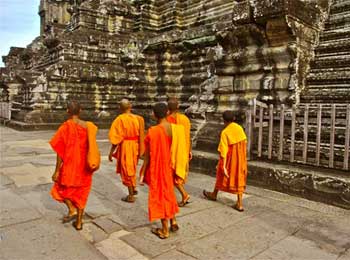 Once a lama who was working in a faraway valley, wrote a letter to chief of monastery. In letter he said, “Send one more lama, we need him here.”

Chief called all his disciples and read that letter in front of them. Then he said, “I would like to send five of you.”

One lama asked, “But why five when he asked only for one?”

Chief replied, “You will know later. I will send five and then too it’s not certain that one will reach because way is long and distractions are thousand and one.”


Disciples laughed as they thought it was stupid to send five when asked for one but chief was insistent and selected five and send them.

Next morning, Their journey started.

When they were passing by a village, a messenger came running to them and said, “Our priest has died and we need a priest. Salary is good.”

Village looked rich and prosperous, so one of them said, “I would like to stay here because that is too Buddha’s work. I am going to stay here. You four will be enough as only one is needed.”

Next day, as they were passing by outskirt of kingdom, King who was passing by them on horse, looked at them and stopped.

One young monk looked healthy and radiant. He said to him, “Wait. I am looking for a young man for my daughter to get married. I have been looking for a groom and you seem to be exactly right. Are you ready? I have only one daughter and after marriage my whole kingdom will be yours.”

Young monk found this opportunity as good to settle and agreed to King request and said goodbye to his friends and left.

Now, three monks who were left, became aware that chief was right. Way is long and there are thousand and one distraction.

Three decided that they will be careful and not be distracted by any such distractions. Deep down there were jealous.

Third night, they lost their way. At night they could see only one light lamp. They went in that direction and somehow reached there.

When they knocked on door, a young woman came out. She greeted and welcomed them and said, “You are God send because i was alone and waiting for my mother father to return but they are not back. I was afraid to be alone. Please stay with me until my parents return.”

Next morning they had to leave but one of them had fallen in love with that young woman and said, “Her parents haven’t return yet. I can’t go until her parents are back.”

Other two tried to talk him out of it but he refused to listen. Two monks who were left, carried on with their journey.

Next morning, When they were passing by village, they got surrounded by crowd because village was atheistic and didn’t believe in Buddha.

One of them accepted the challenge. Other one asked, “What are you doing? Who knows how long it will take. We have to reach valley.”

Monk replied, “Even if my whole life is wasted i will stay here and take challenge. I am devote of Buddha and this man has challenged his philosophies. I will convert this village, You can go. In fact, only one is needed.”

That’s how at last only one monk was able to reach it’s destination, valley.