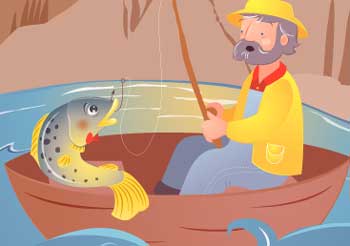 Once there was a fisherman and his wife who were very poor and lived in bad conditions. Everyday husband used to go out for fishing. One day while he was sitting with his rod looking at clear water, suddenly he felt like something was caught so he drew it up and it was a large fish.

As he bought it up the fish said, “I pray you fisherman, Let me Live. Am not a fish really but an enchanted prince. What good you can get from killing? Please let me back into water.”
Fisherman replied, “No need for many words. You can speak and i should let you go anyhow.” and after saying this he left the fish into the water.

On returning home his wife asked, “No fish for today?”
Husband replied, “No, but i did caught a fish who was an enchanted prince so i let him go.”

Wife questioned, “Didn’t you asked any wish before leaving it back to sea?”
Husband was confused and said, “What should i wish for?”


Wife replied, “We live in such bad conditions and it’s so disgusting. You could have wished for little hut for us. Now go back and asked him to give us that.”

Husband didn’t wanted to go back but still he couldn’t oppose his wife and went to sea. There he stood still and called for enchanted prince to come to him.

Fish came to him and asked him for reason to come back. Husband asked him to full fill his wife wish to have Hut.

Prince fulfilled his wish and said, “Go then, She has it already.”

When husband reached home his wife took him inside and it was pretty house with a kitchen, yard, and garden with hens and duck. It was well acquainted house for them to live. Everything went well for few weeks.

But then wife started to think and asked his husband that enchanted prince could have provided them with bigger house like a stone castle. So asked him to go back to sea and wish for castle.

Husband did as his wife asked and wish was granted.

When he reached home he found a great castle instead of hut and his wife was really happy and they went to sleep.

Next morning again she woke up and said, “We can be king, go and ask for us to be king.” Husband didn’t wanted to go back and ask but his wife forced him to go and so the man went.

Husband went to sea and asked for his wife wish. Again the wish was fulfilled.

Fisherman wife was still not satisfied, so she keep on sending her husband with wish to be Emperor, then she wanted to be Pope. All her wishes were granted by Enchanted prince.

But still she was not happy, she asked her husband to wish for her to be God. Listening to this husband refused to go and tried to tell her that this wish can not be full fil but wife angered with rage kicked him out of church to go for wish to sea to the Fish.

Scared fisherman went to fish and told him about wish of his wife to be GOD.
Enchanted prince said, “Go to her, and you will find her back the way she used to be same life she used to live before meeting me at sea.”

And after that they both lived the same for rest for their life.

Moral:
Greed can never be satisfied. Be happy with what you have and Live life to fullest. Happiness is not in things around us but In company of people we live with.

One thought on “Fisherman and His Wife – Greed Story”