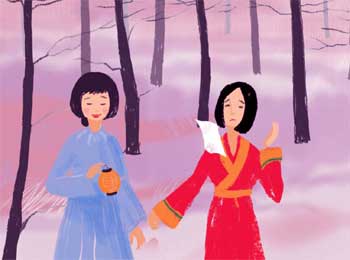 Once in a Japanese village, lived an old man with his two sons. Old man always wanted to have daughters. He waited eagerly for his sons to grow up so that he can get them married.

At last, both his son got married. Old man was affectionate towards both his daughter-in-laws and girls loved and respected their father-in-law.

After marriage many months passed and girls started missing their home. They wished to visit their village for few weeks. Both went together to seek the old man’s permission to leave home for few weeks.

Old man turned sad, as he waited for so many years to get daughters, how could he simply let them go even if it was for few weeks. So, he didn’t give them permission.

After months, they again went to him and asked for his permission but again old man refused.

Again, after few months passed, girls decided to try their luck again. Old man knew that girls wouldn’t stop asking for it. So, he had an idea.

When girls came to him for permission, he said, “You can go if you want but only one condition.”

Girls were so eager to leave hastily and said, “Yes, of course father, we will do anything.”

Old man said, “Each of you must bring me a gift.”

Then he turned to elder daughter-in-law and said, “You must bring me fire wrapped in paper.”

Then he turned to younger daughter-in-law and said, “You must bring me wind wrapped in paper.”

Girls were happy that now they will be able to go to village. They started to look for paper in which they could wrap fire or wind but they couldn’t find any. Many days went by but girls weren’t able to think of anything.

So, They asked many people in village but no one knew.

Girls were sad. They thought that they could never be able to fulfill their father-in-law condition and go back to their village. They came to forest, they rested there and started crying.

At that time, one wise man was passing by and saw them crying. he asked them reason. Girls told him about father- in-law condition for gift.

Listening to that man said, “Stop crying! if that’s condition what’s stopping you from giving that gift to your father-in law?”

Girls replied, “Bu we couldn’t find anywhere such paper that can wrap fire or wind.”

Man laughed and said, “Such paper can be found anywhere.”

Girls were shocked and said, “But..! how can we wrap fire or wind in paper?”

Man replied, “Make a container out of paper and place a candle at center. Fire will never touch paper and then you will have fire wrapped in paper.”

Just then younger girls asked, “But what about wind?’

Man laughed again and said, “Easy! Make semi circular fan out of paper and then move paper and wind blows on your face. Isn’t that wind wrapped in paper?”

Girls thanked man and bought both gifts to their father-in-law. Old man was happy and gave girls permission to leave.