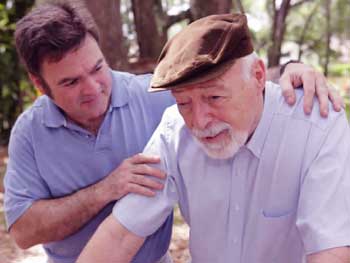 James wanted to meet his son so he decided to go to city to meet his son. He was very excited to see his son but unfortunately someone else opened the door.

James asked about his son and got to know that his son has shifted from that house and now is staying at different location. He felt disappointed.

He thought for a while and then went to neighbors where he got office address of his son. He thanked neighbor and went to his son office.

When James entered office, his son eyes were filled with tears to see his father in front of him. They had simple conversation for a while and then James said to his son, “Son.. Your mom wants to see you.. Can you come home with me??”

Son replied, “Sorry father, i can’t come home now as i have loads of work and it would be hard to manage if i leave now..”

James smiled and said, “It’s ok.. You may do your work. I will be leaving in evening for village.”

Son got sad and requested his father to stay with him for some days but James refused saying, “I didn’t want to make you uncomfortable or be a burden to you while you are busy with your work.”

“Hope if you ever have time then come visit us as your mom and i would be very happy to see you..” said James and left.

After few days son got sometime from his work and thought about his father visit. He got worried and felt guilty for letting his father leave alone at that time.

So he took leave from his office and went to his village to meet his parents but he was shocked to see that his parents were not there at their home.

When he inquired about it, he was shocked to know that his parents left that place and are now leaving at other place. Son got address from neighbor and rushed there.

Son noticed that place seemed like a graveyard.. his eyes filled with tears and scared he slowly walked toward that place.

From far distance he saw a hand waving at him. When he looked closely he noticed that it was his father. Son ran and hugged him.

James said, “What’s wrong why are you crying??” Son didn’t said anything and kept his head down.

James wiped his tears and said, “Why are you sad?? Has anything wrong happened??”

Son replied, “No father.. It’s just i never thought to see in such condition.. Why are you living here. Why did you left that house in village??”

James replied, “Son.. I had taken loan for your studies and when you moved to city but due to loss in farming i was not able to repay that debt.

I came to you but you were already stressed with your work and i didn’t want to burden you with this problem. So i had to sell our home to repay that loan..”

Son whispered, “But you could have told me.. I am your son..”

James replied, “Son.. I didn’t want to cause you any trouble.. So i kept quiet.. All i want is your happiness..”

Son hugged his father tightly and apologized for not able to help him and letting him go off that day. He asked for his forgiveness.

James replied, “Don’t be sorry son.. I am happy to see you and all i want is that you spend some time with us. We love you very much and in this old age it’s hard to travel to city to see you..

Just come to meet us whenever you have time. Your mom and i would be more than to see you even if for short time.”

Moral:
Parents always Work to provide their Children with Best they can. Parents never let their Child know about Hardships and Difficulty they have to face.

Make time to Parents when they need you in their Old Age. Don’t leave them Behind as they are True Reason for your Success.

You May Also Like: Father Son Heart Touching Story