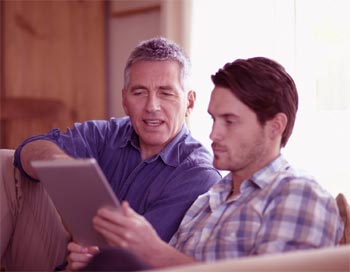 Once 55 years old man and his 82 years old father were sitting on couch in living room doing their own work. Suddenly a crow perched on the window of their living room.

Father pointed toward window and asked his son, “What’s this??”
Son replied, “It’s a Crow..”

After few minutes father again pointed his finger toward window where crow was still sitting and asked his son, “What’s this??”
Son replied, “Dad, i just told you..!! It’s a crow..”

After a little while.. again father asked his son pointing toward window, “What’s this??”
With a bit irritated tone son replied to his father, “Dad, It’s a crow.. It’s a crow..”


4th time again father asked his son, “What’s this??”
This time son couldn’t kept his cool anymore and shouted, “Why do you keep asking me same question again and again.. I have already told you that It’s a crow..”

Seeing his son getting angry, father got up from there and went inside room. He came back with an old dairy. Father used to maintain this dairy since his son was born.

Son was still sitting there. Father sat beside his son and opened a page from the dairy and asked his son to read that page which was dating back to year when son was 3 years old.

— Today my son was sitting with me on sofa. A crow was sitting on window. He got curious and asked me what’s this..

I told him “It’s a crow..” Yet again and again he asked me same question. He asked almost 20-25 times same question and i replied to him every time.

I didn’t felt irritated for even once.. Rather i felt more affection toward him and hugged him lovingly. —

Son thought to himself, “When i was little i asked him same question so many time yet he never felt irritated but today father asked me same question just 4 time i felt so irritated and annoyed that i shouted at him..”

Son realized his mistake and said sorry to his father..

Moral:
Parents take Care of a Child in Every Condition and When your parents attain old age.. Don’t look at them as burden. Have Patience with your Parents When they Need you Most..