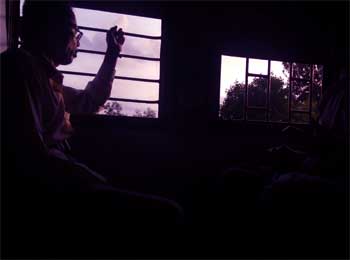 In train, two kids were playing, jumping on seats, running here and disturbing all other passengers in compartment of train. Their father was sitting near by lost in some thoughts. In between, children would look at their father, he would respond with smile and then again kids would get busy with their mischief.

Passengers of compartment were getting upset by such behavior of kids and annoyed by father’s attitude.

Since it was night time, everyone wanted to rest but children were still playing, running here and there, creating un-comfort for other passengers.

Seeing this, one traveler who was not able to tolerate this anymore, said to father, “You children are creating so much trouble for others and yet you are not stopping them but encouraging them by smiling. It is not your duty to make them sit and make them understand how to behave?”


Other passengers took a sigh of relief that complaint was made and father will be ashamed and will stop his children.

But father paused for a moment and said, “How do i explain, I am just thinking…”

Traveler said, “What do you mean? I don’t understand..”

Father said, “My wife had gone to her maternal home to visit but there she died yesterday due to an accident. I am taking my children there. I am confused how to explain to then that they will never be able to see their mother again.”

Hearing this, everyone was shocked and didn’t know what to say.

Children were still playing, running here and there in compartment. Father got silent again. There was no change in atmosphere but those children who were looking spoiled kids, were now looking like small flowers on which everyone was now trying to pour their love.

In their eyes, father was not a careless person anymore but a man who had lost his life partner.

Learning:
Don’t judge people before truly knowing them Because everyone has a story and Sometimes Truth might Shock you.

You May Also Like: Fisherman and Sage Story (Must Read)