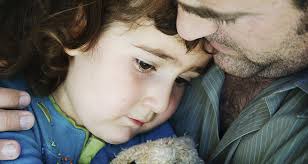 A man and his only little daughter used to live together. He loved her daughter a lot and lived his life only for her. One day his daughter became ill and her dad provided her with all best physicians and doctors together back to health but nothing healed her to health.

All the efforts of father proved fruitless and child died. After he death father became recluse and shut himself away from everyone refusing every activity that might help him to bring him back to his normal self.

One night he had a dream.

In dream he was in heaven witnessing a grand pageant of all little child angels. They all were marching in an apparently endless line toward the white throne.


He saw that all white robed angel girls carried a lighted white candle with them. After sometime he noticed that a little girl’s candle was not lit. Then he saw that girl with dark candle was his own little girl. He rushed toward her and seized her in his arms.

He caressed her with love and asked, ” My angel, how is that only your candle is not lit?”

She replied, “Father, they often relight it but your tears always put it out again.”

Just after this man woke from his dream and knew that what he should do. From that day on wards he was no longer a recluse but meet freely and cheerfully with all his friends. Because now he would no longer let his darling angel candle be extinguished by his tears.

Moral:
Even if we lose someone, Life goes on. We should not hurt gone soul by living a sad and alone life. We should live life Cheerfully and embrace what comes next.

You May Also Like: How Much Do You Earn? (Father Son Emotional Story)