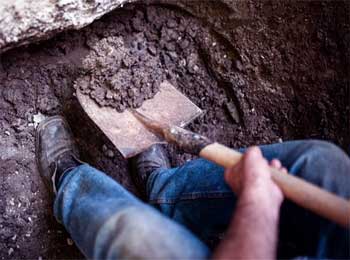 Once in a village, lived a young farmer named Shyamlal. He once set out to dig a well enthusiastically.

He selected a good spot and cheerfully set to work. After digging 25 feet, he saw no sign of water. He got tired and  decided to rest for a while and then continue.

Just then another man came along. He asked, “What are you doing?”

Shyamlal told him about digging well and yet there was no water.


Man took Shyamlal to another spot and said, “If you dig here then you can find water within minutes.”

Saying this stranger left. Shyamlal got happy and started digging right away. Again, he dug more than 25 feet but still there was no sign of water. He got tired.

Yet another man came along and took Shyamlal to another spot and said, “If you strike here, water would gush out in torrents.”

Shyamlal thought for a while and then began to dig at new spot. After several hours, having dug more than 30 feet, the only water that was gushing out in torrents was his sweat.

Though water was scarce, advisers were not. On advice of another passerby, Shyamlal sunk 20 more feet at another spot.

Shyamlal got tired but still, there was not even a trickle of water. Shyamlal was frustrated.

Just then, his friend saw him. When he talked to him, Shyamlal told him whole story.

He said to Shyamlal, “If you had dug those 100 feet in one place, you would have struck water anywhere in village, even under rocky surface.”

Moral:
If One had been Resolute and Determined and had he Stuck to Digging in one place, He would have surely Succeeded.

Moral Stories for Kids: Working With Others