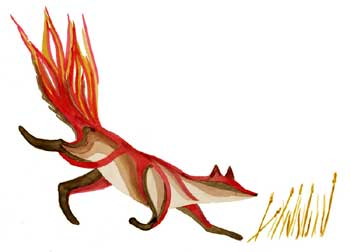 Once upon a time, a farmer was living in a village near jungle.

Farmer had big farm land where he used to cultivate crops and he also had some chickens, goats and cows in his yard.

One day, farmer noticed that his chicken were less in numbers. When he monitored, he found that a fox from jungle was secretly pouching on chickens.

Farmer got furious and planned to trap fox. He decided to lay trap near his yard.


Next day, Farmer laid a trap for fox and luckily fox got trapped in it.

Farmer told his wife about fox. His wife asked him to leave fox far away, deep inside jungle so that it doesn’t come back to their farm.

But farmer was very angry about it’s loss and wanted to take revenge.

Farmer poured water on fox and farmland. When farmer realized his mistake, half of his crops was ruined.

Because of his anger, farmer did his own loss.

Moral:
If you are Patient in One Moment of Anger, You will Escape a Hundred days of Sorrow.