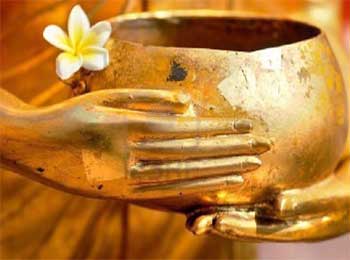 Once in Bharat, lived a naked fakir, Nagarjuna. he was famous and loved by all.

Queen who ruled at that time, also admired and respected him a lot. One day she asked him to come to palace, to be guest. Fakir went. When he came, Queen asked him for favor.

When Fakir met Queen, he said, “What do you want?”


Without asking anything, Fakir gave it, only thing he had. Queen took that and in return gave him golden bowl, studded with diamonds.

Queen said, “Thank you. I will worship this begging bowl that you have carried for years. It will be my temple. Besides, a man like you should not carry an ordinary bowl. So please keep this golden one which was made specially for you.”

Any ordinary fakir would have said that i can not touch it and have renounced the world but Nagarjuna was no ordinary mystic, it was all same for him. So he took the bowl and left.

When he left palace, a thief started following him.

Fakir was staying outside town in a ruined ancient temple. Thief hid behind wall just outside the door. Thief thought that it wouldn’t be difficult to steal bowl once fakir fell asleep.

Fakir knew about thief. He thought, “So why unnecessarily let him wait? Be finished with it so that he can go and i can also rest.”

Thinking this fakir threw bowl outside door. Thief understood this act and couldn’t go without thanking.

He peeked him and said, “Sir, accept my thanks but seeing a rare being and i cannot believe my eyes and i great desire has arisen in me. I am wasting my life being a thief and there are people like you.. Can i come in and touch your feet?”

Fakir laughed and said, “Sure, that’s why i threw bowl outside, so that you could come inside.”

Thief came in and touched his feet. When he touched Fakir’s feet, he felt presence of divine.

He asked fakir, “How many lives will it take for me to become like you?”

Thief said, “You must be kidding. How can it happen now? I am a well known thief and whole town knows about me and yet they have not been bale to catch hold of me.

Even King is afraid of me because i have entered and stolen from treasury. I am master thief. How can i be transformed right now?”

Fakir replied, “If in an old house for centuries, there has been darkness and you bring a candle, can darkness say – ‘for centuries and i have been here and i can not go out just because you have brought a candle in. I have lived here for so long.’

Can darkness give resistance? Will it make any difference whether darkness is one day old or millions of years old.”

Thief said, “But what about my profession? Have i to leave it?”

Fakir replied, “That is for you to decide. I am not concerned with your profession. I can only give you secret of how to kindle a light within your being, then it’s up to you..”

Thief said, “But whenever i have gone to any saints, they always say first stop steal only then you can be initiated.”

When you enter someone’s house in night or you have opened up the treasure or do whatsoever you want to do but don’t forget watching your breath.”

Thief was surprised and said, “This seems to be simple. No morality? No character needed? No other requirement?”

Watching the breath i become so silent, so alert, so conscious that even diamonds look like pebbles. You have created difficulty for me, a dilemma. Now what am i supposed to do?”

Fakir smiled and said, “Do whatsoever you want to do. If you want that silence, peace, bliss, that arises in you when you watch your breath then chose that.

If you think all those diamonds and gold is more valuable then chose that. That is for you to chose. Who am i to decide for your life?”

Thief said, “I cannot chose to be unconscious again. I have never had such peace and bliss. I am never going back to being thief. Please accept me as one of your disciples.”

After that thief became Fakir’s disciple.

Moral:
It’s Never to Late to Start on Path of Goodness and Righteousness.