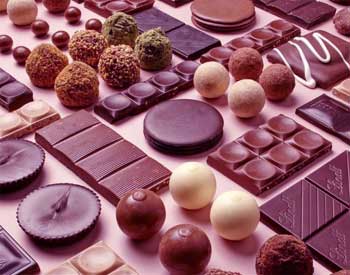 Aztecs used Cacao seeds were a Form of Currency.

There are 2 types of Cacao tree. Most chocolate comes from Forastero Beans but the Crillo bean makes much Tastier Chocolate.

Chocolate is the only Edible substance to melt around 93° F, just below Body temperature causing it to Melt easily on your Tongue.


Chocolate produces the Effects of a Mild anti-depressant by increasing Serotonin and Endorphin levels in the Brain.

Despite being High in Fat content, Chocolate doesn’t seem to Raise Blood cholesterol.

Chocolate has over 600 flavor Compounds

It is Believed that people who are Allergic to Chocolate are actually Allergic to Cockroaches, as around Eight Insect parts are typically found in a bar of Chocolate

There is a Rare fourth kind of Chocolate in addition to the classic milk, dark and white varieties: Blond chocolate.

There is a Little caffeine in Chocolate. Most bars have about 10 milligrams of Caffeine in them but Darker chocolates can have as much Caffeine as a can of Coca-Cola.

A Cacao farmer also has to Wait up to 4 years before their cacao tree Bears Fruit.

Cacao trees may actually live up to 200 years. However, They produce beans for just 25 years of their Lifespan.

It takes the Whole of one year’s crop from One tree to make Half a kilo of Cocoa.

Cocoa butter is a By-product made from Crushing roasted Cacao beans. It is also used inCosmetic products including Massage oils and Skin cosmetics.

Chocolate is Harmful to dogs and cats. The Toxic component theobromine in Chocolate, can easily be Metabolized by Humans. However Dogs and cats can’t Process it as easily as Humans.

Brussels Airport is the World’s biggest Chocolate seller, Selling over 800 tons of Chocolate a year.

You May Also Like: Working with Others – Moral Stories