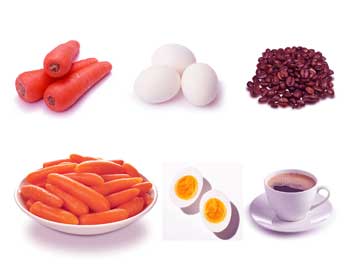 Once a young women complained to her mother about how hard her life is going on and that she wanted to give up.

After listening to her, her mother took her to kitchen and there she took three pots and filled them with water then she placed pots with water on fire and bring them to boil.

In the first pot she placed carrots, in second she placed eggs and in the last post she placed some grounded coffee beans.

After 20 mins she turned off gas and took out boiled carrots and eggs and placed them in a bowl and in a cup poured some of the coffee. She kept all those bowls in front of her daughter and asked, “Tell me.. What do you see??”


Daughter replied, “Carrot, eggs and coffee.” Mother moved bowl of carrot toward her daughter and asked to touch and feel texture of carrot.

Now mother moved bowl of eggs toward her and asked her to break the egg.

Daughter looked at her mother and questioned, “What does it mean??”

Her mother explained, “Each of these objects faced same adversity but reacted differently. As you can see carrot was hard and strong but after being subjected to boiling water, it became softened and weak.

Eggs which were fragile, after getting boiled it became hardened. At last, coffee which we added to boiling water, changed water..”

After explaining this, mother asked her daughter, “Which are you? When you face adversity in life, how will you respond?

Are you going to lose your strength after facing adversity or you would be like egg hard and tougher. If you are like the bean, when things are at their worst.. you get better and change the situation around you.

When the hours are the darkest and trials are their greatest, do you elevate to another level? How do you handle adversity? Are you a carrot, an egg or a coffee bean?”

Keywords: Facing Adversity Moral Short Stories about Overcoming Obstacles, What do you Want to Be/ How do you Handle Adversity Motivational Stories