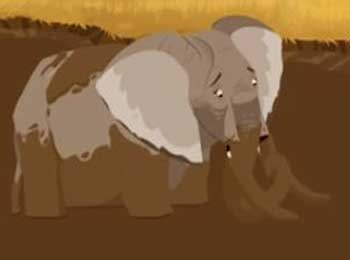 A King had many elephants. One of them was very powerful, obedient and skilled in fighting. He went with King in many wars and was King’s favorite.

As time passed, elephant got old and King cared for him and would not take him to war with him anymore.

One day, elephant went to near by pond to drink water and his leg got stuck there. Elephant tried a lot but couldn’t get himself out of pond. At last he gave up.


Many people gathered there with King and many efforts were made to get elephant out of that muddy pond but still all went in vain.

At same time, Gautama Buddha was passing by that place. People went to him and asked for help. Gautama Buddha inquired about the elephant and then inspected the spot.

Then he said to King, “Drums of war should be played around elephant.”

King asked his servants to bring drums and soon sound of drums of war surrounded elephant and with that there was a change in expression of elephant. He stood up and tried coming out of pond muddy pond with enthusiasm by himself and soon he was out.

People were surprised to see that and asked Buddha, “We tried so much but still couldn’t get him out but now elephant came out by himself. How is this possible?”

Buddha said, “There was no shortage of physical ability, we just needed to motivate him. Because elephant used to go to wars and he was not able to go there anymore he lost his desire and will. Using drums helped him get his enthusiasm back.”

Learning:
Similarly in our Life many times we stop thinking positively and lose enthusiasm and get stuck. Therefore, Don’t let Despair overwhelm you and always keep a Positive Attitude.

You May Also Like: Old Man/ Wise Man – Motivational Stories for Adults