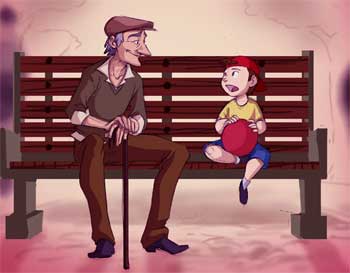 Once in village lived a little boy who was very athletic and for whom winning was most important.

One day, that boy participated in running competition held in village. In that competition he competed with other two young boys. Race commenced, crowd cheered and waved at him. Boy called on his determination and strength, he won and came first. Little boy felt proud.

Later second race was called and in this race two young and fit challenger came forward and run in competition with little boy. Once again little boy finished first. Crowd was ecstatic and cheered and waved at that boy.


Seeing this wise old man stepped forward and with him he presented two new challengers. Among new challengers one was an frail old lady and other was blind man.

Little boy was confused and asked, “What’s this?? this is no race..!!

After all were set on starting line. Race started and boy was only one to finish that race, leaving two challengers standing at the starting line.

Little boy raised his arms in delight but to his surprise this time no one from crowd was cheering and everyone was just looking at him silently.

“What happened?? Why are people not cheering??”, little boy asked old man.

Little boy thought for a while and then again went to starting line and stood in middle of old lady and blind man. Then he took both of them by hand and started to walk slowly and at last crossed that finish line.

Little boy felt proud but still didn’t understand why crowd was not cheering him before but now when all three of them finished race together. So he asked old man about it.

Old man replied, “Little boy, in this race you have won much more than what you won in any other race..!! You have won people’s respect..”