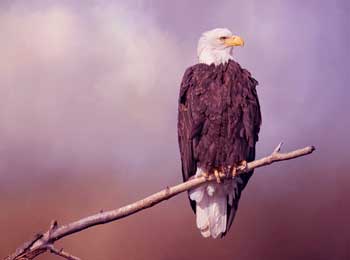 A long time ago, someone presented two children of an eagle, as a gift to a King. They were of very good breed, King had never seen such magnificent eagles before. King appointed an experienced man to look after them.

After few months passed, King wanted to see them and reached place, where they were kept. King saw that both eagles had grown quite big and were now looking more magnificent than before.

King said to man who were taking care of them, “I want to see them fly.”

Man went near eagles and signaled them to fly. Seeing signal, both eagles started flying. One eagle was touching the heights of the sky while other flew little and came back and sat on same branch from which it had taken off.


Seeing this, King felt something strange. He asked, “What is the matter? One eagle is flying so well where as other one doesn’t want to fly at all.”

Man replied, “Your majesty, i tried everything but he just doesn’t seem to want to fly.”

King loved both eagles and wanted to see them both flying high in the sky.

So, next day it was announced in whole state that person who will be able to make that eagle fly high in the sky would be given a lot of prizes.

Many scholars and learned people came and tried to make eagle fly but even after weeks passed, eagle was still in same condition, it would fly a little and sit back on branch.

Then one day, King saw that both eagles were flying high in the sky. He couldn’t believe his eyes and immediately asked to find out the person who did this feat.

Next day, that man appeared in the court. After offering him gold coins as reward, King asked, “Tell me, How you have done what the great scholars couldn’t do?”

Man replied, “Your majesty, I am a simple farmer, I don’t have much knowledge. I just went and cut off the branch on which that eagle used to sit. When eagle wouldn’t find the branch on which he had habit of sitting, he also started flying up with it’s partner.”

Learning:
We are All made to Fly High but sometimes We become so used to what we are doing that we Forget our Ability to Fly High. Since Birth we have been sitting on the Branch of Desires and Out of Ignorance, we do not even know that What we are doing today.

We have forgotten, that we also have Wings of Meditation, with which we can Fly, from Matter to God, from Vain to Meaningful.

You May Also Like: Three Brothers and Scholar Story – Way to Progress