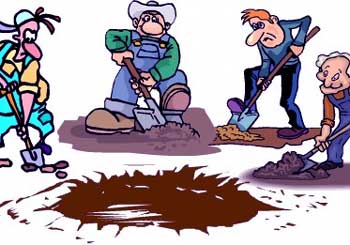 One day as farmer was passing by the well suddenly his donkey fell in to the well. Well was deep so donkey was not able to get out of it and cried for hours as farmer was trying to figure out idea to get it out of the well.

After hours of thinking and seeing donkey cry he finally decided that the well already needed to cover up and donkey was old and wasn’t worth to retrieve. So, he invited all his friends and neighbor to help him cover up the well leaving donkey inside.

All the people grabbed shovel and started to through dirt inside the well. At first donkey didn’t realized whats happening but when he realized he cried horribly. After some time he quieted down. Every one was amused to see this silence.

After farmer loaded few shovels he looked down in the well and was surprised to see that donkey did something amazing.


He saw that with every shovel dirt that fell on donkey’s back it would shake it off and take a step up. As people continue to shovel dirt donkey continued to do same and take step up. Pretty soon he was at the edge of the well and it’s life was saved.

Moral:
When life shovel all kind of dirt on you, trick is to Not to get Down by all the problems and Take time to stop and think of way to solve it.

You May Also Like: Painter Job and Hole in Boat..! (Small Help, Big Result)

Search Keywords: Shake It Off And Step Up Motivational Story, Donkey Stuck in the Well Moral Stories in English for Kids and Students