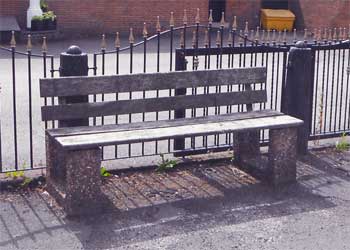 When bench was installed – mothers, kids, homeless, teenagers and many other would sit there and wait for bus.

One day, lady saw that bench was covered with bold letters written with spray paint. Lady went home and bought back solvent and gloves and scrubbed it off.

Later many time it would be covered with spray paint, lady would scrub that off. One day, she found that bench corners were broken, she re-mortared it.


Passengers came and went, some left garbage. Lady would go and pick that up and would say, “I want it to be beautiful and clean here.. If i don’t pick it up then from who can i expect to pick it up..”

Some days later, she found that bench slab corners was broken. Lady cursed and cried and she wasn’t sure anymore what to do.. For week that bench parts sat there broken and no one came forward to mend it.

Finally that lady asked some neighbors for help and loaded it into her van and then drove it to a mason and asked him to cut off broken part and make a shorter bench and then they reinstalled it.

People began sitting on it again and comfort themselves while waiting..

Just two days later she saw that bench was off it’s leg from one side. She tired to move but was not able to do it. She looked at bench and light graffiti marks left on it and then she walked home and fetched her husband to help her set it back in place with another round of mortar.

Evil or destruction is easy. It is fast and frequently dramatic but goodness is tenacious. It grows out of the humble, persistent efforts of individuals (often unseen and unsung) who are determined to bring beauty and care taking to the people that they touch and the communities in which they live.

You May Also Like: Do Good Have Good Moral Story