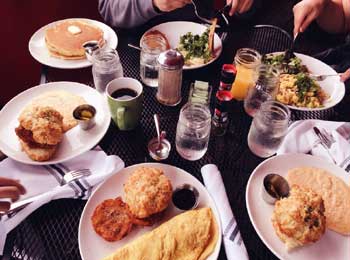 Germany is a highly industrialized country. In such a country, many will think its people lead a luxurious life.

Once a group of men, colleagues from a company arrived at Hamburg, Germany. When they arrived they were all hungry, so they all looked for a near by restaurant. It was on walking distance.

They walked into restaurant and saw that there were lots of empty table.

Few seats were filled at restaurant. There was just a couple on one table and on other side there was sitting few old ladies.


One of those man noticed that when dishes were served, waiter would serve food for them in their plates and they would finish every bit of food on their plate.

They were hungry, they ordered food. After a while their Head ordered more food. Soon they were full. When men got up to leave, there was still about one third of unconsumed food left on table.

Seeing this, one of those old ladies said to those men in English that it was not good to waste food and they were unhappy about it.

At this one of those man said, “We paid for our food. it’s none of your business how much food we leave behind.”

Old ladies got furious and one of them immediately took our her mobile and made a call to someone.

Just after a little while, a man in uniform arrived from Social Security Organization. Upon knowing what dispute was about. he issued a 50 Euro fine to those men.

Then officer told them in stern voice, “Order what you can Consume, Money is yours but Resources belong to Society. There are many others in World who are Facing Shortage of resources. Have no Reason to Waste Resource.”