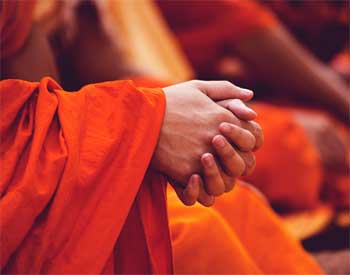 Disciple went to master and said, “I am ready. Please tell me what i have to do for my last initiation.”

Master said, “You have to go to King, early morning. You have to be first visitor to King for the day. Because King has a habit, whosoever comes to him first, asks whatever, Kings will give.

King is wise, takes care of his people so good that people forgot about it and years had passed and nobody goes to King, early morning to ask for anything.


Remember, After waking up as sun rises, first thing King does is to go into his garden for walk. So be there.”

Disciple followed order. He didn’t take any chance and was at King’s garden at 3 o’clock early in morning, waiting for King.

As sun was rising, Disciple saw that King came to garden.

Disciple went to King and bowed down. King said, “Do you need anything? You can ask for anything and i will give it to you.”

Disciple came from poor family and when King said that he can ask for anything, Great desires possessed him.

To be certain, Disciple asked again, “What do you mean by anything?”

King replied, “I mean anything. You can ask for gold, palace or even if you demand for my kingdom, i will give it to you.”

Poor disciple couldn’t think of just one thing. He thought that may be asking for ten thousand rupees will do but just then he thought why only ten thousand gold coins, why not hundred thousand coins.

After waiting for a while, King said, “It seems that you are not ready to ask, I will go for my morning walk, meanwhile you decide. When i return, whatsoever you ask will be given to you.”

For half an hour, he went on and on about thinking.

When King came, disciple said, “Sir, if you are so willing to give, i ask for everything. All that you have – Your Kingdom. All your riches, your palaces – everything.”

Listening to this, King fell on his knees, started praying to God, tears rolling down from his eyes – of great joy, ecstasy.

He was thanking God saying, “I have been waiting for such a man. How long have i waited. Finally you heard my prayers. Now he has come and i am free of all this nonsense. Thank you.!”

When King was saying all these things to God, Young disciple was standing beside him and started to think, “What is the matter? Why King is feeling so happy renouncing the kingdom, What am i getting into? If for thirty years he has been praying to leave this, then it’s not worthwhile at all. I am getting into unnecessary trouble.”

Disciple fell in his knees, touched King’s feet and said, “Majesty, I am young man, i m fool. Please excuse me. I don’t want anything. Your prayer to God had made me realize my mistake. Thank you. Please i don’t want anything. I want to go Back to forest to my master.”

King tried to persuade him asking him to stay for while and look around but Disciple still refused saying, “I cannot stay here, not even for a single moment because my mind can betray me. An insight has happened. I am thankful to you.”

When young disciple came back, he told whole story to his master. Master said, “Your initiation is over. Now, nothing will ever make a slave of you. Now, you are alert, conscious, free. You have passed. I m Happy.”