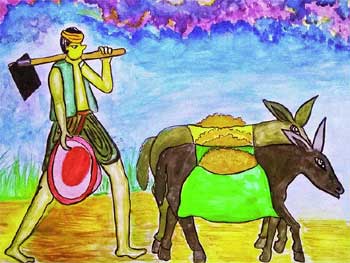 Once a saint was going to a city. On his way he saw a big tree and stop by to rest for sometime. Saint fell asleep.

He saw a dream. In his dream he saw a man who was passing by that way with five donkeys carrying heavy load, which seem to be very difficult to carry by donkeys.

Saint asked man, “What have you kept in these bags which they are not even able to carry?”

Man replied, “These are filled with things for human use. I am taking these to market to sell.”

Man replied, “First donkey you see. It is laden with tyranny (cruel and oppressive rule), It is sold at a very high rate.”

Saint asked, “But who will buy tyranny?”

Man replied, “Buyer for this are King’s and Ruling people that why it fetch high price.”

Saint asked, “What is in bags of second horse?”

Man replied, “These bundles are full of arrogance and it’s buyers are scholars.”

Man continued, “Then on third donkey there are bags of jealousy and it’s customer are rich people, who are unable to tolerate each other’s progress. There is an influx of people to buy it.”

Man replied, “Fourth donkey’s bag are full of dishonesty and it’s customer are business man, who cheats in market to get a lot of profit from sales.”

Saint was curious and asked, “Then what’s in bag of last one?”

Man smiled and said, “It contains bundle of trickery and it’s demand is among those who have no work and try to deceive others for their benefits.”

Just then Saint woke up from his sleep and realized that the man he saw in his dream was Satan (Devil) itself who was spreading evil in the world and it’s victim become selfish people of weak mentality.

Only way to avoid becoming victim of ill is to remember God and have full faith in him.

Moral:
While doing any work, it is important to Remember that God is watching us. Remembering God keeps us from going Astray (away from path of Goodness).

You May Also Like: Young Man Three Question to God..!