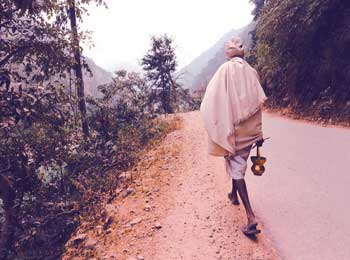 Once upon a time, a Sadhu (Indian Monk) used to live in a hut outside village. One day while passing through market, he saw many basket and among them was basket of dates.

Seeing those dates, desire to eat them arose in Sadhu’s mind. He had no money to buy them, so he controlled his desire and continued on his way to hut.

But even after reaching his hut, thoughts of dates wouldn’t go away. He kept thinking about them only and couldn’t even sleep properly at night.

Next morning, when he woke up, he started thinking of way to earn money so that he can buy dates and fulfill his desire.


He decided to go to nearest forest and collect dry wood and sell that in market and earn money. He went to forest and started picking dry woods, till evening he was able to collect a lot of dry wood sticks and make a bundle of it. Carrying that bundle on his shoulder, he started walking toward market.

Bundle of wood was heavy and it was very difficult for Sadhu to lift it and cover that distance. Sadhu was tired because of all the work, so he stopped and rested for a while and then continued walking toward market.

He reached market and was able to sell all the wood in the market. Now, he had enough money to buy dates. He was very pleased and reached shop to buy dates. With all the money he earned, he bought dates and happily started walking back to his hut.

On his way, he thought, “Today i had desire to eat dates. Tomorrow some other desire may arise. If today i give in, then i will become slave of my desires.”

As soon as this thought came. Sadhu gave up idea of eating those dates, which he bought after so much hard work and gave all the dates to a poor man who was passing by him at that time.

Learning:
If we are defeated in front of all our desires, then we will become slaves of our desires forever. The mind is fickle, desires keep arising in it.

In such a situation, it is necessary to control the desires. Only after carefully assessing the desires, steps should be taken for their fulfillment. Only then will you get success in life. We are not to make ourselves slaves of our desires, but to make desires our slaves.

You May Also Like: Monk Alms-Pot Story – How to pacify Human Desires