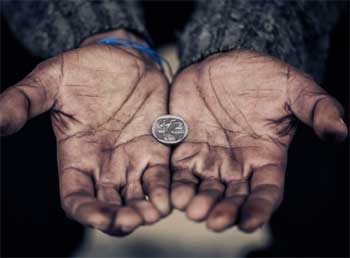 Once upon a time, lived a Sage who used to go from one place to other. Once he was passing through a street of capital city of a kingdom. On his way he found a coin on side of road.

Sage picked it up and kept it. Sage used to live a simple life and had no use of that coin so he thought of giving it to someone in need.

He roamed through kingdom whole day but didn’t found even a single person who seemed unsatisfied or in need of money. At night he reached a rest area and spent his night there.

Next morning he woke up and was doing his daily activities, King who was passing by that rest area saw him and ordered his soldiers to stop there.


King went to Sage and said, “I am going on war to win over another state so that my kingdom can be expanded.. Please bless me to be victorious..”

Sage took out the coin he was holding on and gave it to King.

King was confused at act of Sage and questioned, “Why did you gave me this coin?? What meaning of this??”

Sage smiled and replied, “O great King..!! Yesterday in morning while i was strolling in capital city, i found this coin on road side.

I picked it up and decided to give it to someone needy.

Whole day i walked around meeting people in city. With whomever i communicated, found that they are living happily and seemed satisfied with whatever they have and because of that i still have this coin.

Today, When King of this kingdom is going on for war because of desire to gain more and not satisfied with what he already have..

So i felt like person who needs this coin most is you, King of kingdom itself.. that’s why i gave it to you..”

King realized his mistake. He thanked Sage for precious life lesson and decided not to go on war.

Moral:
We all Desire to have more and because of that we Waste Chance of Enjoying what we Already have.. In order to Live a Happy and Healthy Life, We should Learn to be Happy with what we have..

More Wisdom Stories: Buddha’s Wisdom.. ( Is Being Abused by Someone – Reason to be Angry?? )