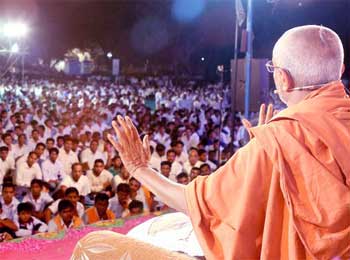 Man came to know that old man was deaf and thought, “If he is deaf, he cannot hear the discourse and if he cannot listen to story, then he will not understand.. then why does he even come? He doesn’t even leave until Satsang ends.”

He went to saint told about old man, and said, “Baba ji, this old man laughs while listening to your discourse but i came to know that he is deaf.”

Listening to this, saint called that old man.


Saint asked his disciple for a pen and paper and wrote, “I came to know you are deaf, still you come to Satsang.. Why?”

Old man replied, “Baba ji, i cannot hear but i understand that when God-realized great man speak, he himself first take dip in God’s realization.

When a worldly man speaks, his speech touches one’s mind and intellect but when a Saint or Sage speaks, his voice touches the person soul. I can’t hear your nectar but its movements touch my body.


And i also get virtue of sitting among pious souls who come to hear your discourse.”

Saint realized that old man was rich in understanding, he asked, “Everyday, you come early and sit in front, why so?”

Old man replied, “I am eldest one in family, as elders do, so do the younger ones.

Person who listens with faith and concentration and meditates on it, without doubt person can get to learn ultimate truth of life.

You May Also Like: What is Importance of Satsang? Saint Disciple Story