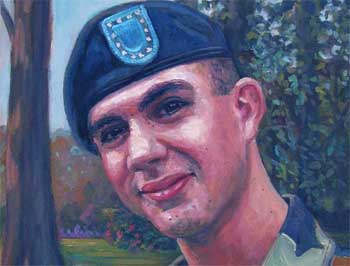 Long time ago, There was rich man and his son. Both shared a passion for collecting art. They used to travel around the world together and collect priceless work by Picasso and many other. Man had an satisfaction as his son had trained eyes and sharp business. So, Man knew that he would became as experienced art collector.

As time passed, War engulfed nation. His son left to serve his country. After few weeks, father received a telegram about his son death while helping a fellow soldier to a medic. Distraught and lonely old man faced Christmas holidays with sadness.

On Christmas morning, Someone knocked at old man door. As the old man was going towards door, the masterpieces on the wall only reminded him of his son. As he opened the door, Soldier greeted him with a large package in his hands.

Soldier introduced himself to old man and said, “I was a friend of your son and I was the one who he was rescuing when he died. May i come in? I have something to show you.”
Both began to talk, Soldier told man about how his son told everyone his father’s love of fine art. He said, “I am an artist and I want to give you this.”


As the old man unwrapped the package to reveal a portrait of his son. Though it wasn’t a work of genius but the painting featured His son face in striking detail. Man thanked soldier for priceless gift and hanged the picture just over the fireplace.

As days passed by gallantry of his son continued to reach him and fatherly proud eased his pain of grief. Soon The painting of his son became the most prized possession for old man and he used to tell his to his neighbors. Next spring, Old man became ill and passed away leaving his will. The art world was in anticipation, Unmindful about story of man’s only son.

According to the old man will, all the art work was to be auctioned on Christmas day. Soon the day arrived and art collectors from around the world gathered to bid on world’s most spectacular painting’s. Every one was very excited about the art collection auction.

The auction begin with the painting of his Son’s portrait. Auctioneer asked for an opening bid but the room was silent. He asked, “Who will begin the bidding with 100$?”. No response came. Minutes passed no one bid on it. Everyone was waiting for art collection but no one showed any interest in his son’s portrait.

“Who cares about this painting? It’s just painting of his son. Let’s move on to good stuff” Someone said from the back of the room.
Auctioneer replied, “No sir we first have to sell this one. Now. Who will take this?”

Finally a friend of old man spoke, “Will you take 10$ for this painting because that’s all I have. I knew the boy so i would like to have it.”
Auctioneer continued, “I have bid of 10$, Will anyone go higher?”

Still no one respond. So auctioneer said, “Going one, Twice and one.”

“Now, we can bid for art treasures.” said someone.
After listening this auctioneer announced that the auction is over.

This announcement stunned everyone and room got quiet. Someone got up and asked, “What do you mean by it’s over? What about all other painting’s? What’s going on here. I want explanation.”

The Auctioneer replied, “It’s simple, According to the Will of father who ever takes the Son.. Gets it All..”

Moral:
We should respect and value simpler things in life.

You May Also Like: Father Way of Living (Must Read inspirational Story for Kids)