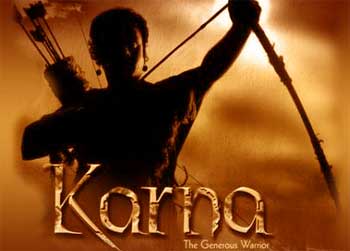 One day while Shri Krishna and Arjuna were out for stroll, Arjuna said, “If you permit.. Can i ask you something??”

Krishna smiled and replied, “Sure, you can ask me anything without any hesitation..”

Arjuna said, “I don’t understand why Karna is considered as most generous person of all.. ”

Krishna smiled and replied, “Sure, i won’t just tell you.. You can see for yourself..”


Just then in a blink, Shri Krishna turned two nearest hills into gold.

After this Krishna instructed Arjuna to distribute gold from that hills among people from nearest village.

As instructed Arjuna immediately went to hill and called villagers to distribute gold to them. When villagers came, he asked them to stand in queue and then started giving away gold to them one by one.

Villagers started praising him. Listening to all the praise, Arjuna felt proud. By this time Ego has started to get into him.

For two consecutive days and nights Arjuna kept on digging gold and distributing among villagers. Villagers were coming back in queue for gold, Arjuna was tired and not a bit of gold lessen from hill.

Arjuna got so tired that he went to Shri Krishna and said, “I am tired, i can’t do it anymore..”

Krishna smiled and replied, “It’s Ok. You can rest.”

He called all villagers and after everyone was gathered, Karna announced, “This gold belong to you.. You may take as per your requirement..”

After saying this Karna left. Arjuna was surprised and confused. Krishna understood.

Krishna said to Arjuna, “When you were asked to distribute gold, you were deciding about requirement of each villagers need of gold. You were doing it knowing that it’s charity.

Where as Karna just gave away all the gold and left. He didn’t even waited for people to praise or cheer him. He was not interested in what people will say about him. It’s sign of a man who had become enlightened.”

Arjuna’s question was answered to him in beautiful manner.

Moral:
Expecting Gratitude or Congratulations In return of doing charity or help will just turn it into a deal. If We are Giving some Help or Donation we should do it without any Hope for anything in Return.

You May Also Like: Bamboo Plant and Flute – Krishna Story