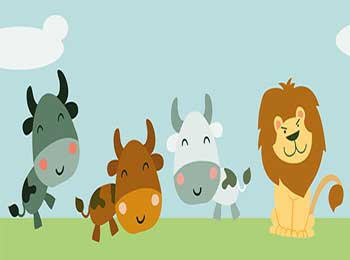 Long ago, there was green and fresh pasture, where three cows lived, a white cow, black cow and brown cow. Cows were kind and nice to each other. They used to graze together and sleep together.

Till, one day a lion happened to pass that way and saw them. He was looking for prey.

On catching sight of them, he became happy but he couldn’t attack them because they were together. So, lion sat in corner, waiting for cows to separate from each other.


Lion wanted to eat them. So a plan occurred to it.

Lion went toward cows and greeted them, “How are you my friends? Are you fine? I remember you from long time ago but couldn’t come to ask about your health because i am too busy. So, today i decided to anyhow come and see you from near and visit you.”

White and black cow didn’t said anything but brown cow replied, “Sir, your visit has brightened our pasture. Thank you for visiting.”

Just then lion said, “I have always remembered you, i have even order a better pasture made ready for you.”

Brown cow replied, “Sir, you have really obliged us and we are very thankful to you.”

Both white and black cow were troubled by their friend’s response. They grieved at its thoughtlessness and feared lest it should be deceived. They refused to go with lion.

Lion didn’t said anything and left. He started to come to them daily. Soon brown cow became more and more close friend to lion on each day. Black and white cow advised it as much as they could, but with no avail.

One day, lion said to brown cow, “You know that color of our bodies in dark and white cow body color is light. It would be good if i eat white cow, so that there will be no difference among us any longer and we will live together.”

Brown cow agreed and as planned, started talking to black cow to keep it busy and mean while white cow was left alone and was killed by lion.

Two days passed, since lion devoured white cow. Now, lion wanted to eat more and was getting angry and uneasy as brown cow was roaming near him grazing pasture.

Lion called him and said, “See, color of your body and mine are reddish brown and black doesn’t go with our color. It will be very good if i eat black cow. So that in forest we all will be of same color.”

Brown cow agreed and left black cow alone. Lion attacked and devoured black cow also. After black cow was gone, brown cow was filled with joy thinking, “It is only me who has color of lion.”

Again, few days passed. Lion roared and called for brown cow saying, “Where are you?”

When brown cow came, lion said, “It’s your turn. get yourself ready. I am going to eat you.”

Brown cow with great fear and horror said, “Why? I am your friend. I did whatever you said then why do you want to eat me?”

Lion roared and said, “Your friend? How is it possible that a lion makes friendship with a cow?”

No matter how much brown cow begged and entreated, lion didn’t listen and attacked cow.

Just then brown cow said, “Please al teast allow me to cry three times before you eat me.”

Moral:
Don’t be Deceived by Sweet Words of Evil because United we Stand, Divided we Fall.