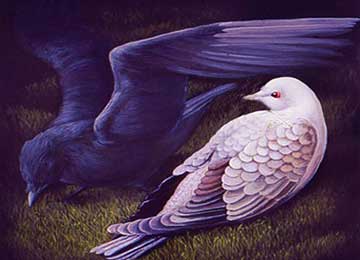 Once upon a time, in a city people used to set-up bird house in side their garden as act of kindness for bird.

In that city, lived a rich man how had put up a bird’s house near his kitchen, where a wise pigeon started living.

While living there pigeon noticed that, cook of that house was very cruel person and he didn’t liked animals or birds very much.

So, pigeon always kept his distance from that cook. Pigeon would leave early morning and come back late at night to rest. Pigeon was happy and content with having a place to sleep at night.


Few days later, a crow came to that bird house because of smell of food cooked in kitchen. Crow wanted to have that fresh made meat for himself.

When pigeon noticed that he warned crow that it’s not safe to go in that kitchen as cook was a cruel person and would not spare him if caught stealing.

Pigeon advised him to look for food somewhere else but crow wanted to have that food.

Crow started to live with pigeon in that bird house and started to look for opportunity to go in that kitchen in absence of cook..

Then one day when pigeon was out, crow got an opportunity. He saw that cook had prepared fresh fish in big stew pot and while it was cooking, lid was kept bit off, to allow steam to escape.

Watching from the bird house, he saw the cook go outside to rest. Meanwhile, crow flew into the kitchen and sat on the edge of the stew pot. First he looked for the biggest piece of fish he could find.

Then he stuck his head inside and reached for it. But in so doing, he knocked the lid off. The clattering sound brought the cook into the kitchen at once.

Cook saw the crow standing on the edge of the pot, he closed the door and window of the kitchen.

Crow tired to fly away but cook grabbed him and plucked out all his feathers. Then cook threw that crow outside kitchen and closed windows.

The crow sweated and suffered from the terrible burning pain. He cried in agony all day long.

In the evening, the pigeon returned and was shocked to see the terrible state of his friend the crow. He said, “Obviously, you didn’t listen to me at all. Your greed has done this to you. I’m so sad there’s nothing I can do to save you.”

Soon crow died from pain and seeing this wise pigeon chose to fly away from that place to safer bird house.