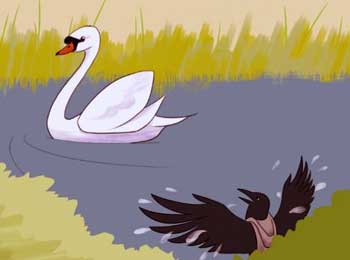 A herd of swans was passing over the beach. A crow was also having fun at same place.

He looked at swans with disdainful eyes and jokingly said, “You guys fly so well!! You just flap yours wings.. Can you fly as fast as me? Can you show acrobatics in air like me? No.. You don’t even know exactly what is called flying!”

Hearing crow, an old swan said, “It is good that you can do all these things but you shouldn’t be arrogant about this.”

Crow replied, “I don’t know arrogance, if any of you can compete with me then come forward and beat me.”

It was decided that competition would be held in two stages. In first stage, crow should show his flying tricks and swan also have to do same. In second stage, crow would have to repeat feat of swam.”

In first stage, crow showed many tricks. It would go round and round ad sometimes it would fly up while touching ground where as swan couldn’t do anything special compared to him.

Now crow started speaking even more loudly, “I was already saying that you people don’t know anything about flying..”

Now, began second stage, swan took off and started flying toward the sea. Crow followed him.

Crow wondered if flying straight over a sea is a challenge and said, “Really!! Is this challenge? Are you a fool?”

Swan did not answer and kept on flying silently. Gradually they went far away from the ground and the crow’s talks also decreased and in a while it stopped completely.

Crow was now terribly tired, so much that it was now difficult for him to even keep himself in the air. Now, he was getting closer and closer to water, again and again.

Swan saw this and understood crow’s condition but acting unaware, he said, “Why are you touching the water again and again, is this also your act?”

Tired crow replied, “No. This is I am sorry. I am tired and if you do not help me then i will die right here, save me. I will never show arrogance.. again.”

The swan took pity on the crow, he thought that the crow had learned a lesson, now it would be better to save his life and he took the crow on his back and flew back to the beach.

Learning:
We should understand that even if we do not know, there is some goodness in everyone that makes him special and even though we have thousands of good things in us but if we get arrogant about it, then sooner or later we also have to be ashamed like crow.

You May Also Like: Crow and Cobra Story – Clever Thinking

Search Keywords: Crow Challenge to Swan – Arrogance Story, Learning for Life Short Story, Appreciating Goods in Others Story, Crow and Swan Story with Moral for Kids, Don’t be Too Proud Story for Adults