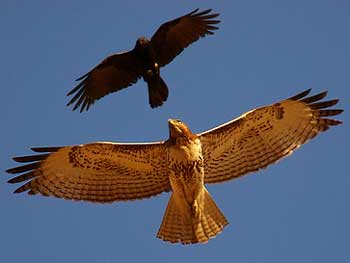 How Foolish Imitation can Harm You..

Long time ago, there was a crow who used to imitate everyone around him. There lived a Hawk on atop of tree, who would fly down everyday in search of food. Crow used to watch Hawk do this everyday and see how Hawk used to fly for long hours in air and swoop around to catch his prey.

The Hawk who was gifted with sharp eyes to see prey at long distance and then fly down to catch his prey at once.

Crow used to watch this and think, “If Hawk can do this, I can too. Once day even I can do same thing.”


One day, As hawk was circling in sky, crow decided to do same. Suddenly a rabbit came out of bushes. Hawk saw it and same did crow. But before crow could even make a move, Hawk flew down and grabbed rabbit with his claws and disappeared in the sky.

“That’s not a great skill”, Crow thought to himself and decided to try to catch prey some other time.

Next time crow saw a big fat mouse coming out of hole, without wasting time it swooped down and tried to catch it like Hawk used to catch his prey. But mouse saw it and move quickly and crow crashed in hills. After getting hit in hill crow cried in pain.

Just then Hawk came flying down and said to crow, “I hope now you understand that it’s not easy to hunt and more over not easy to imitate.”

From that day onwards crow never tried to imitate anyone in its life and lived happily ever after with God-given abilities.

Moral:
We should Not try to imitate others. God has given everyone Different Ability and work accordingly. So, trust your self and your Ability.