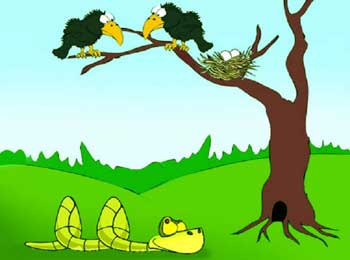 Once there was a big banyan tree on a river bank. A couple of crow lived on one of the branch of that tree. They built a nest there. One day, crow laid eggs and was eagerly waiting for young ones to come out of eggs.

There in cavity of tree, lived a cobra. When crow laid eggs, cobra waited for crow to leave in search of food.

One day, when nest was left unguarded, cobra climbed up and eat eggs one by one. When crows return they saw cobra eating eggs, they begged cobra to spare remaining eggs but cobra didn’t listen and ate all the eggs.

Every time crows laid eggs, cobra would gobble them up. Crows were in deep despair. Male crow started to think of some way to get rid of cobra forever.


When he started to think, he remembered that a princess used to come to river to take bath. Just then a brilliant idea stuck his mind.

Next day, when princess came to river, crow was waiting for princess to get into river. When princess was engrossed in enjoying good time in river, crow saw her necklace on heap of clothes on river bank.

When no one was seeing, he picked up the necklace, bought it back to tree and then dropped it in snake’s burrow.

When princess returned, she didn’t find her necklace and complained to King. King immediately sent his soldiers to search for necklace.

While searching near river bank, one of soldier saw that necklace in snake’s burrow. Soldiers quickly killed the cobra and took back the necklace.

After that crow was able to hatch its eggs and loved happily ever after.

Moral:
A Little ingenuity can help in Defeating even a Powerful enemy.