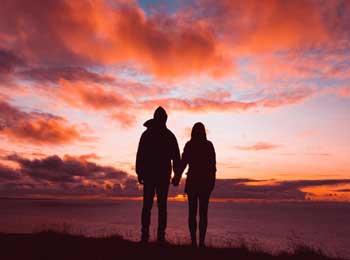 Once a young couple lived in city. They were living a happy life together but they would still worry about if their happiness would last forever.

One day, they heard that an old man had come to town who could solve all kind of problems. So couple decided to visit wise old man and told him about their problem.

Wise old man said to them, “Travel around world and seek a man and woman who are perfectly happy as couple. When you find such couple, ask them for a piece of cloth from man’s shirt, then keep that piece of cloth always with you and with that you will always be happy.”

Young couple were happy to know that and began their journey to find the happiest couple.


On their way, they heard about governor and his wife were happiest. So went to their place and asked them, “Are you the happiest couple?”

Governor and his wife replied, “Yes, we are happy in every way except for one thing.. We don’t have any children.”

Couple realized they weren’t the happiest couple. So they continued their journey.

They arrived in one city where they had heard about a couple who were known as happiest. They went to them and asked, “We heard that you are happiest couple in this city. Are you happiest?”

Couple replied, “Yes, we are really happy except that we have too many children which makes our life a bit uncomfortable.”

That couple didn’t sound to be happiest. So young couple continued their journey.

Young couple visited many villages, cities, towns, countries and asked many couples same questions but still they didn’t find what they were looking for.

Couple met a shepherd on their way. Shepherd was with his wife and child, taking his sheep for grazing. While they waited, wife laid the mat and everyone started to eat contentedly. They seemed really happy with each other.

Young couple went to them and asked, “Are you the happiest couple?”

They replied, “We are happy. We have everything we could have asked for.”

Young couple immediately understood that they are happiest couple. So, they asked shepherd for a piece of his cloth, so that their happiness too would last through.

Shepherd replied, “If i give you a piece of cloth from my shirt then i will be left without any clothes. Since i own just one shirt.”

Young couple left without piece of cloth and understood that it is difficult to find perfect happiness anywhere in world. So young couple decided to return to their home and went to old wise man.

They told him about all the places they went and about people they met. They also complained about how difficult it was to find couples.

Wise old man laughed, “Was your journey useless or did you learn something from it?”

Young couple replied, “Yes, we learned that Nobody is perfectly happy. We learned that their are difficulties in everyone life. Happy is one who is contented with whatever they have.”

Wise man replied, “Indeed, the Sign of happiness is in one’s Heart. Everyone have their own share of difficulties but If you are content with what you have then you will overcome difficulties and be happy forever.”

You May Also Like: Who is Poor? King or Yogi