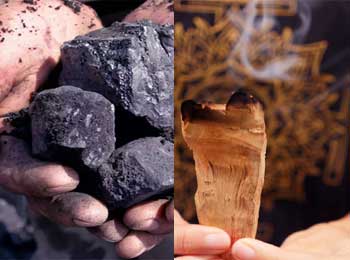 Long ago, a man used to live his family happily. He got old and when his last time came near, he called his son and said, “Son, i have spent my whole life educating the world. Now, in my last moments i want to tell you something important.”

Listening to this son was looking at his father attentively. Just then his father said, “But before that go and bring a piece of coal and a piece of sandalwood to me.”

Son found this very strange but since it was his father’s order, he went out to bring coal and sandalwood.

He went to kitchen where he found a big piece of coal easily. he took it and hold it in his one hand. Then he went to garden of his house where there was a small sandalwood tree.


Since he was holding coal in one hand, He broke a piece of sandalwood from the tree with other hand. After getting both thing, he went back to his father.

Seeing both things in his hands, father asked him to drop both things from his hands right there. Son did as asked and then was about to leave to wash his hands.

Seeing this, his father stopped him and said, “Wait son, show me your hands.”

When son showed his hands, father took his son hands in his hands and then looking at the hand in which he was holding coal, he said, “Son, see.. this hand turned black as soon as you held coal in it. Even after you threw it away, soot remained in your hand. Such is company of wrong people. It hurts to be with them and even if they are not there, you face notoriety (bad reputation) for life.“

You May Also Like: Two Friends and Talking Tree!

One thought on “Coal or Sandalwood! Father Lesson to Son”