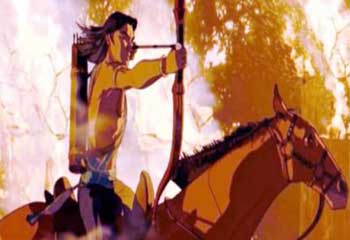 Once lived a brave king who had fought many battles and won but unfortunately in his last battle he was badly wounded. King was saved but in that battle he lost his one eye and a leg.

One day while King was seeing some of painting of previous King’s of that kingdom. He realized that he never had his portrait made.

So he thought to himself, “I should have painting of myself too, then my pupil will remember me for years to come..”


When all painters were present in court, King came and said, “I want you to make beautiful portrait of me..”

All of them started to discuss about it with each other.

After a few minute, King asked, “Who will paint my portrait?”

No one came forward as everyone was worried that it would be almost impossible to make of beautiful portrait of King with only one eye and one leg and if they make a bad portrait, it could angry king.

While everyone was discussing what to do.. One painter came forward and said that he would love to make a beautiful portrait of king.

After a month portrait was displayed for people of kingdom. Other painters also came to see that painting as they were curious about it and were surprised to see how beautifully that young painter has captured beauty and bravery of King even with only one eye and a leg.

In painting – King aiming for a hunt with an eye closed and a leg bent.

Everyone appreciated painter for his idea and how beautifully he executed it and made a beautiful portrait of King.

Moral:
The World will look Beautiful only If we could Ignore others Weakness and Celebrate their Strength.