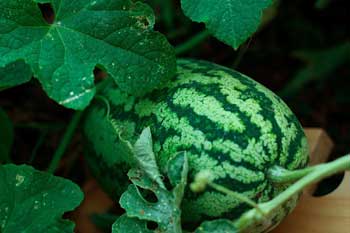 In a small village lived a very hardworking farmer. Once in his field he had grown a huge watermelon. Farmer was very proud of his watermelon and he knew it was the biggest anyone had ever seen. He gazed it for hours thinking about what to do with it.

First he thought that he should sell it in market as it would get him good profit but then again he thought and decided to keep it in exhibition. He kept on thinking like that and at last he decided to gift it to King. Farmer went to sleep with his happy thoughts about the rewards he will get from king for that watermelon.

King of that kingdom was very kind and caring so he had habit of going for walk through his kingdom disguised as common man in order to check if all his subjects were safe. That same night, king disguised as a common man passed by farmer’s house. There he spotted that big watermelon and was so fascinated by it that he went over to farmer house door and knocked on it.

Farmer woke up and came out and questioned, “Who are you and what do you want at this time?”


King replied, “I am a poor man and saw this big watermelon in this field and I want this watermelon.”

King got curious and asked, “Why no?? What are you going to do with it?”

Farmer replied, “I am going to give to our king as present.”

“Then He may go to Hell..!!”, was instant reply from farmer.

After this conversation king left and farmer went back to his sleep.

Next morning, Farmer carrying his watermelon went to king’s palace. When he saw the King, he recognized him but instead of getting scared or thinking about last night conversation he pretended as if he knew nothing. Now he presented king watermelon he bought and said, “Your majesty.. This is the largest watermelon in this country. I brought this for you as present i hope you will like it.”

“Well, in that case you already know my answer.. Your Majesty..!!” replied farmer.

Listening to farmer response king smiled and said, “I accept your gift”. King rewarded farmer not only for his gift but also for his wittiness and intelligence.

Moral:
Intelligence and Mindful thinking can help us to get out of difficult situation with Ease.

You May Also Like: King Demand and Clever Story Teller..!