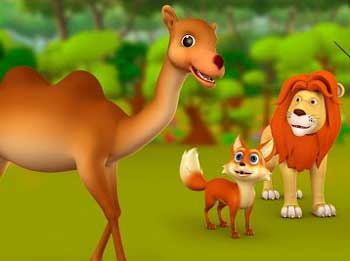 Once a fox used to live near a garden, from there he would eat his fill and return. One day, gardener found out about him and patched the hole from which fox used to come inside garden.

Fox was not able to find any way to get back into garden and grew hungrier, with each passing day.

Seeing no other option, he decided to visit lion who used to live in near by forest, in hope of eating some leftover scraps from lion’s hunt.

Fox walked day and night, he reached lion’s den. He sat at entrance of den and yelled, “Hello my friend, It is your friend fox is here to pay you a visit.”


Lion roared, “What brings you here? How you have been?”

Fox replied, “I walked all the way to meet you. After all, we are friends But don’t ask me how i am doing, for i am very sad today.”

Lion asked, “Why, what happened?”

Fox replied, “I haven’t eaten in days. My belly is empty. I wasn’t able to find any food on way here. Do you have anything to eat?”

Lion replied, “I am ashamed to say this but i have no food for you. Though i recently caught a fat boar but i ate him all up. However if you can wait, i will see what i can hunt in forest tomorrow.”

Fox was too hungry to wait for another day. He thanked lion for offer and said, “I know a dull camel that works in a mill near by. I can trick him into coming here. Then you can kill him and we can both eat well.”

Fox just then left to meet camel. When he reached there he saw that camel was working going round and round in circles, moving millstone, grinding wheat into flour.

Fox replied, “Hello, my friend. I came to meet you, visit my dear friend camel”

Camel replied, “How have you been?”

Fox replied, “I have never been happier. I am on my way to secret land that i recently discovered where grass is always green and where there is plenty to eat and there is no need to work for food.”

Fox then said in lower voice, “Are you going to spend your life working?”

Camel thought for moment and replied, “I have to work to earn my keep. Working is hard but i am content.”

Fox got silent, after a while he said, “I have an idea..! Why don’t you come with me to my secret land. We can both live there happily without working.”

Camel thought this over for a while and then agreed to accompany fox. Fox chewed through camel’s rope and freed him from grind.

Fox was already tired so he asked camel to let him ride on his back and he guides him to secret land. Camel agreed. On way, fox kept whispering things to camel, to keep him distracted.

When they reached near lion’s den, at that moment camel caught sight of lion hiding in bushes and discovered that it was a trap.

Camel thought to himself, “I must find a way out of this trap before it’s too late.”

Camel immediately turned around and started walking back to mill. Confused fox asked, “Why have you turned back now?”

Camel replied, “I have forgotten something very important. I must fetch it immediately.”

Camel replied, “It’s a book of advice by my father.” as he increased his pace to get away from lion, hiding in bushed. Fox realized that he was powerless to stop camel. So he decided to play along and tried to convince him to come back next day.

Fox asked, “What was so important in that book?”

Camel replied, “There are five advice. First was never to go anywhere without this book.”

Saying this camel walked as fast as possible to reach mill. At last he reached there and then said, “Second, There is not Shame in Honest work. Third, Be Thankful for what you have. Fourth, Never be friends with trickster, for in end they will trick you too. Fifth was most important and that was don’t go close to lions.”

Saying that, camel shock fox off his back and returned to mill for grinding.