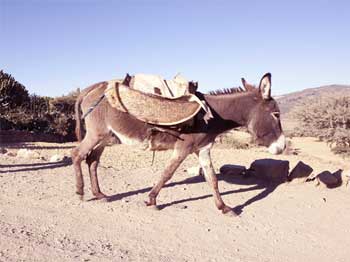 Once a man was going to market with his donkey who was carrying two sacks of rice. After a while, man stopped on his way to rest under a tree. He tied his donkey near that tree.

Rope was loosely tied. When he woke up from his nap, he couldn’t find his donkey around. Man got worried and started searching for his donkey everywhere.

While searching for his donkey, he met a boy and asked, “Have you seen my donkey?”

Boy replied, “Is your donkey blind from left eye and has lame right foot. Was he carrying load of rice?”


Man got happy that now he will be able to find his donkey and said, “Yes..! yes..! that’s my donkey. Where have you seen it?”

Boy answered, “I haven’t seen it.”

Man thought to himself, “How could have boy known so much about my donkey without seeing it. May be he had stolen my donkey.”

Man asked boy again about his donkey. Boys still told him that he hadn’t seen. Man got angry and took boy to village chief for solution.

Man said to village chief that boy had stolen his donkey and now refusing to tell him about his donkey. Boy still insisted that he hadn’t seen his donkey.

Chief asked boy, “Dear boy, if you hadn’t seen donkey then how could you describe him so well.?”

Boy replied, “I saw tracks of donkey on my way. Donkey’s foot steps of right were different from left and from that i understood that donkey that passed from that way was limping.

Then i saw that grass on right side was eaten but not on left side, from this i understood that donkey’s was blind from left eye.

There were grains of rice scattered on the ground on way, donkey had passed. From that i understood that donkey must be carrying load of rice.”

Village chief understood that boy was not guilty and praised him for his cleverness. Man understood his mistake and left to find his donkey.

Moral:
We should not be too Quick to Judge Other’s.

You May Also Like: Nasrudin and his Donkey Story..!