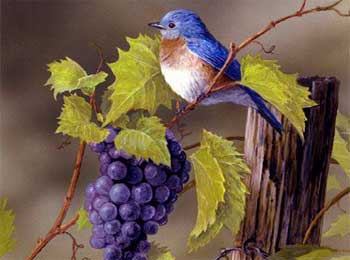 Once upon a time, a King rules in a kingdom and he had a very beautiful garden in his palace.

One day a bird came to the garden and tasted grapes from vine. Grapes were sweet in taste and from that on wards that bird would come to garden every day, sit on vine and eat all sweet grapes and throw down sour and unripe grapes.

Gardener noticed this and got very angry at the action of bird. He tried to drive away bird but failed. So, he told King about it and requested, “Your Majesty! Please do something about it.”

King decided to deal with bird himself. Next day, he went to garden and sat hiding under the cover of dense vine of grapes. As usual bird came and sat on vine and started eating grapes. Seeing opportunity king caught him.


Bird tried a lost of get free from King’s grip but all in vain. In end she begged King to release her but King refused.

Then bird said, “If you leave me now, i will tell you four things of knowledge.”

King accepted this and said, “OK. First tell me those four things of knowledge. Only after listening to them i will decided whether i should leave you or not.”

Bird said, “First thing – Don’t ever let an enemy who comes to your hands go.”

King replied, “What else?”

Bird said, “Second – Never to believe in anything impossible.”

“Fourth point is deeper. I want to tell you that but you have held so tightly that i am suffocating. Loosen your grip a little so that i can tell you fourth thing.”, bird said.

King loosened his grip. As soon as grip was loosened, bird escaped and sat on higher branch of tree, which was out of King’s reach.

Bird sitting on top of tree said, “Fourth – Nothing happens just by listening to knowledge. It also has to be implemented. Just a while back i told you three things of knowledge but even after listening to them, you ignored them.

The first thing I told you is that never leave the enemy in hand. But you left the enemy that came in your hands, that is, me.

The second thing was not to believe in impossible things but when I said that the fourth thing is very deep, you believed my words.

The third thing I told you is not to regret the past and see, you are regretting my release from your clutches.”

Saying this the bird flew away.

Learning:
Mere Acquisition of Knowledge does not make one Wise. A Wise person is one who Applies the Acquired Knowledge.

You May Also Like: Old Thief Lesson to Young Man (Must Read)