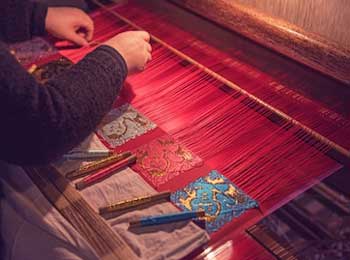 Once in state of Wei lived a man named Leya. He was married to a very angelic and virtuous woman. He loved and respected her wife a lot.

One day, When Leya was returning home, on his way he found a piece of gold. He was delighted to see it. He picked it up and ran toward his home, so that he could tell his wife about it.

When he reached home, he happily showed that piece of gold to his wife. Looking at gold, his wife asked from where did he got that.

Leya replied, “I got it on my way back. It was lying there on road. So i picked it up. We can use it.”


Wife calmly said, “As you know, it is usually said that a true man never drink the stolen water. How can you take such a piece of gold home which is not yours?”

Leya was greatly moved by her words and he immediately went back and replaced it where it was. After this Leya never did anything like that again.

Later, Leya went to a distant place to study classics with a talented teacher, leaving his wife alone at home.

One day, Wife was working, weaving on loom, just then Leya entered. Wife was surprised to see him. She asked him reason to come at home before completing his studies.

Leya looked at her and said, “I missed you so much. I left my studies halfway just to come back to you. So that i can be with you.”

Wife got angry and just then she took up a pair of scissors and cut down what she had woven on loom.

Leya was puzzled to see this and asked, “Why did you cut it?”

Just then his wife said, “If something is stopped half way, it is just like cut cloth on loom. The cloth will only be useful if finished. But now, it’s nothing but a mess. So is with your studies.”

Leya understood his mistake. He left home resolutely and went on with his studies. He didn’t return home to her wife until he gained great achievements.