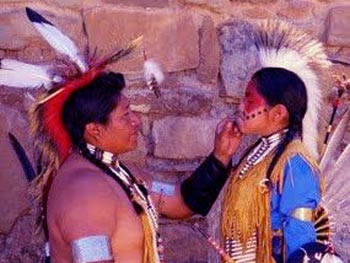 Cherokee Indian’s had a ritual for boy’s initiation into manhood.

According to this ritual. Father blindfold his son and take him into the forest and leaves him there alone. There boy is required to sit on a stump for whole night until ray of sun shines through it.

Boy has to sit there all by himself without removing the blindfold. To complete this ritual boy had to sit there without asking or crying out for help to anyone. Once boy completes this ritual, survives that night then he become a Man.

No boy is allowed to share this experience with any of his friends of boy a each boy have to experience this and come into his own manhood.

A young boy had to go through this ritual. His father blindfolded him and took him into the center of forest where he could here all kind of noises. Boy was terrified to hear those noises.

Boy was sitting on stump and wind was so hard that it shook his stump. He could hear animals howling at night, sound of trees and grass bowing because of wind. He was scared to think if someone would attack him or some animal come at him and because of blindfold he would not be able to save himself for any kind of danger.

Boy was scared yet he sat stoically without removing his blindfold because he knew that it would be only way he can be man. Young boy survived the night, sun appeared and boy could feel the warmth of sun rays. He removed the blindfold.

To his surprise, he saw his father sitting right next to him on another stump..

When he talked to his father, he got to know that his father was sitting there all night right next to him watching him the entire night.

Moral:
We are Never Alone. Our Family, Friends are always there for Us. Even if we feel that we are all Alone and no one is there for Us. Always remember that God is with us always.