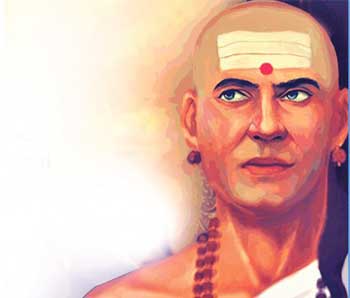 Chanakya was insulted at King Nanda’s kingdom and he wanted to take revenge for his insult. Soon, he meet a child name Chandragupta who was bright.

Chanakya started to teach him. He collected enough money to raise an army for Chandragupta. He taught them about battle strategies and taught Chandragupta all about rights and duties of a King.

Chanakya remembered how he was insulted in kingdom of King Nanda and decided to attack his kingdom first. Chandragupta army was inexperienced compared to King Nanda’s Army and was not able to stand up to them.

As result, Chandragupta was defeated and had to flee along with Chanakya and hid in woods.


One day as Chanakya entered village in search of food, he passed by a hut. There he heard excited voice of a child. Chanakya saw that mother was serving him hot rice porridge.

As soon as, boy started to eat rice porridge, he started to cry saying that his fingers got burnt.

Seeing this, mother said, “Of course, they will get burnt because you acted as foolish as Chanakya.”

Intrigued and curious Chanakya entered into room and before woman could say anything he said, “Sorry to barge in like this but i just came in to inquire meaning of your words.”

Woman was surprised but still replied, “I was merely telling this kid to eat properly. I served him hot rice porridge and he should have realized that it was hottest at the center and start eating from outer fringe which cools down first.”

“Yes, i get that but what has it do with Chanakya’s foolishness?”, questioned Chanakya.

Woman replied, “Everything. Chanakya is foolish, he went and attacked Nanda’s kingdom at the outset instead of conquering small kingdoms all around before going to the center.

Just like a child trying to eat hot porridge from middle..! That’s why Chanakya lost and had to flee.”

Chanakya was surprised and humbly replied, “Thank you mother. You have taught me a wonderful lesson in war strategy. I shall not make same mistake second time.”

Later he reorganized their army and set about conquering small kingdom first and eventually succeeded in ousting Nanda’s kingdom from Pataliputra.

Moral:
Wise Person Learn from anyone an

d Everyone and as soon as he understand his Mistake, he Corrects them and Move Forward.

You May Also Like: Pandit’s reply to Householder..! (Judging One by Looks only)