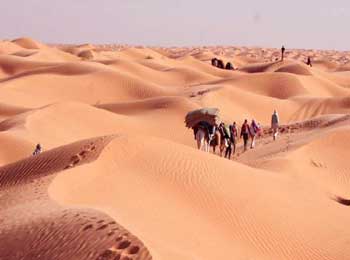 Once upon a time, a caravan of tradesman was going to another country to sell goods. Along the way they came to edge of a severe hot sand desert. Before coming to that desert, they got to know that during day sun heats up the fine sand so much that no one can walk on it, not even bullock or camels.

Leader of tradesman caravan knew that they could only travel at night when sand cools down. So he hired a guide who could help them to cross that desert and began their dangerous night time journey across the desert.

After traveling for couple of night, one evening after they had their evening meal and when sand was cool down, they started out again.

That night guide who was driving the first cart, saw from stars that they were getting close to other side of desert and relaxed. While relaxing he fell to sleep. Because guide slept, his camel whom everyone was following, gradually turned to side and went in big circle until they ended up at same place where they had started from last night.


When sun came up and caravan stopped, people realized that they were back at same spot where they camped last time.

Everyone in caravan became worried and began to cry about their condition. Since the desert crossing was supposed to be over by now, they had no more water were afraid that they would die of thirst.

All people started to blame caravan leader and desert guide and said, “We can do nothing without water, how will we survive?”

Then leader thought to himself, “If i lose courage now in middle of this disastrous situation and do nothing then all these good and bullocks and lives of people will be lost.”

So he started to think of way to save them all.

Remaining alert, at some distance, he noticed a small clamp of grass. He knew that it wouldn’t be possible for plant to survive in this desert without water. He got hope to find water and went to his fellow travelers.

He told that about grass and asked them to dig up the ground on that very spot. All agreed and started to dig that area. They dug and dug and after a while they got down to a large stone which seemed impossible to break.

Seeing it they all lost hope again and began to blame leader saying, “This is useless. We are just wasting our time.”

Leader replied, “No, my fellow travelers. It’s not useless. If we give up now all our effort will be ruined and our poor animals will die. We should try little more..!”

As he said this, He got down into already dug hole and put his ear to stone and heard very light sound of flowing water.

He called over strongest man from caravan and said, “If you give up, we will all perish.. So, take this heavy hammer and strike the rock with all your strength.”

Man lifted hammer over his head and hit rock as hard as he could. He himself was surprised to see that large rock split in two and a mighty flow of water gushed out from under it.

Suddenly, all people were over joyed and filled up their water pouches and continued on with their journey.

Before they left, they raised a high banner so that other travelers could see it from afar and can come to this new spring in middle of hot sand desert.

Moral:
Don’t give up too Easily. Keep trying until you Reach the Goal.