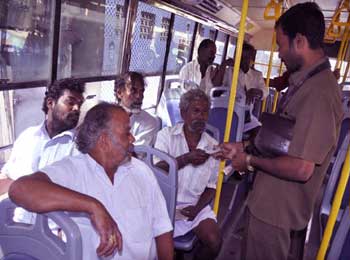 A priest who lived in city was famous far and wide. One day due to sudden demise of a priest of temple located in a nearby village, he was appointed priest there.

To go to village, he boarded bus and gave the fare money to the conductor and sat down on the seat.

Priest thought, “After a while i would return money to the conductor.”


After sometime priest thought, “I am unnecessarily getting worried about a small amount like ten rupees. After all, even these bus companies earn lakhs from people.

So, it is better to keep this money as God’s gift. I will make good use of them.”

As soon as priest got off bus, his feet suddenly stopped and he put his hands in his pocket and took out ten rupees and gave it to conductor and said, “Brother, you gave me ten rupees extra after deducting the fare.”

Listening to this conductor smiled and said, “You are new priest of village temple?”

Conductor said, “I heard a lot about you and had desire to listen to your discourses for many days. When i saw you in bus i thought let’s see what would you do if i give you more money.

Now, i believe that your conduct is same as your discourse, from which everyone should learn.”

Listening to this priest was sweating, after bus left, priest thanked God with folded hands, “God! Thank you many times, you saved me. I had bid for your teachings in the greed of ten rupees But you gave me an opportunity to do the right thing at right time.”

Learning:
Sometimes, we too, put at stakes our Life’s worth of Character Capital, in the tiniest of Temptations. Therefore, we should Never give in to temptations and Do right things despite how small it is.

You May Also Like: Thirsty Man under the Trees – Way Our Thinking Change