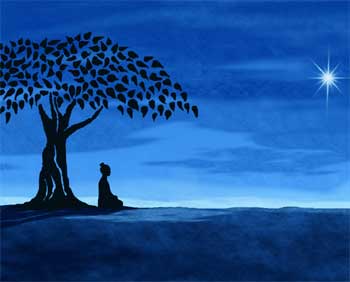 Once Buddha with his followers was traveling from one town to another town. While traveling they walked by a lake. After some time they all stopped to rest.

After all settled down one of his disciples asked him, “How can we calm mind when we have disturbing thoughts??”

Buddha was sitting under tree and said to him,”I am feeling thirsty. Can you bring me some water from that lake??”

Disciple walked back to lake and noticed that some people were washing clothes. So walked some distance to get clean water and sat there to collect but as he was going to collect water a bullock cart passed by and water became muddy.


Disciple waited but one or other things were going on there and water was still muddy. So he thought to himself that he can’t give such muddy water as it is not fit to drink so he decided to go back without water.

Disciple came back empty handed and told Buddha about it. After hour Buddha asked him to go back to lake and bring some water. Disciple went back to lake and this time he was able to find clean water. He filled pot with water and brought it back to Buddha.

Disciple gave water to Buddha and said, “Last time i went there was lot of mud in water but now water on the surface of lake was clean… How??”

Buddha replied, “When you went last time mud was unsettle and it was mixed with water on surface and water became unfit to drink but when you went after an hour mud settled down on its own.. and You got clean water that was fit for drinking..

Your mind is like that also when it is disturbed give it some time and it will settle down on its own.. You don’t have to put effort to calm it and with time your mind will be calm effortlessly.”